Akufo-Addo directs engineers to check integrity of all public buildings 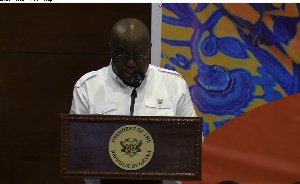 President Nana Addo Dankwa Akufo-Addo has directed the engineering department of the Ministry of Works and Housing to conduct an integrity audit of all public facilities to ascertain their preparedness for disasters, specifically earthquakes.

President Akufo-Addo issued the order when he announced his acceptance of a report by a committee of experts on Ghana’s preparedness for earthquakes.

Speaking at the forum to discuss the content of the report of the committee, President Akufo-Addo charged the engineers to perform the audit and advise government on steps to be taken.

“The experts tell us the earthquake does not kill. However, it is the collapse of the structures that is responsible for the human and economic losses. This means that to avoid or reduce these losses we need to ensure that buildings including dwellings, dams and bridges are structurally competent and resilient to earthquakes of higher magnitude.

“Constructing well-engineered structure including dams and roads and retrofitting important public lifeline buildings such as hospitals and schools cannot be compromised. That is why I asked the Engineering Council of the Ministry of Works and Housing to ensure that comprehensive integrity audit of all public buildings and structures is conducted and government appropriately advised,” he said.

President Akufo-Addo also disclosed he has instructed the Ghana Geological Survey Authority to furnish the government with information on equipment needed to monitor earthquake-related activities in the country.

“I also urged the Ghana Geological Survey Authority to advise government on the logistical needs of the equipment required by the authority to undertake round the clock monitoring of seismic activities for urgent action”.

The President acknowledged the sacrifices of the members of the committee and expressed the nation’s gratitude to them.

“I directed the Minister for the Interior and National Security to prepare a technical committee to ‘prepare a framework for the refocusing of Ghana’s earthquake preparedness and response’. The committee worked diligently and has produced an exhaustive report with recommendations.

“It has proposed an elaborate set of action plans for implementation to help build national resilience against the destructive effects of earthquakes. I accept the report and endorse fully the recommendations and attached action plan,” he said.

Wu-Tang Clan on Beyoncé, Game of Thrones and Vegan Whoppers | Questionnaire of Life